There are some programs when installed, create so many hidden files and registry entries that default windows ‘add/remove’ feature is unable to find while the removal or uninstallation of the programs. This applies to another situation when you are installing something and the installer notifies you in the middle of the installation that the file is corrupted and cannot install further. This leaves a heap of junk files in program installation directories and invalid entries in windows registry.

This happens to almost every normal user who knows how to install or uninstall a program. But you do not have to worry any more and let ‘Windows Installer CleanUp‘ utility help you in these situations.

It’s an old but tiny and very powerful utility that wipes out programs leftovers and uninstalls them leaving not a single bit of entry in the system. It looks up registry references and files related to Windows Installer that were installed by various programs, and forcibly wipes invalid entries out.

It is developed to help Windows-based computers clean up installed programs that would either refuse or pretend not to remove themselves from the add/remove programs feature in Microsoft Windows. 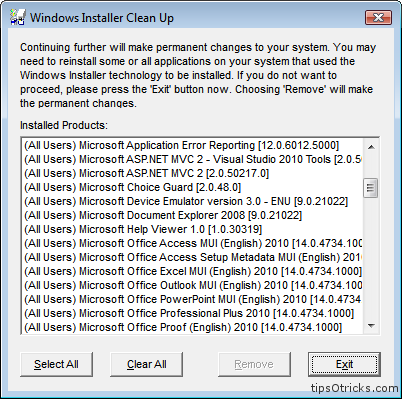 This tiny utility is ridiculously fast in uninstallations. Just select a program from the list and hit the remove button, it removes program’s files, registry entries and its entire history from the system in few seconds and never ever asks for system reboot, where advanced uninstallers take several minutes and might prompt to reboot the system.

Windows Installer Clean up was first released in 1999, and has been a favorite of millions of pro Windows users since then. Recently some old programs in my system refused to uninstall and I tried almost all steps to wipe those files out but no avail. And believe it or not this 12-year old tiny utility helped me uninstalling and won the top spot of my favorite uninstallers 😀

The utility was retired by Microsoft on June 25, 2010 due to some conflicts with Office 2007 files but it works perfectly even on Windows 7 and supports all previous version of Windows, both 32 and 64 bit.