The battle between internet explorer and Firefox is going on in all the aspects, weather it should be over design or where security matters.I’m user of Firefox and IE both( having both browsers :P), one of my friend is good friend is using IE , I tried to let him use Firefox but he’s in live with IE even personna didn’t work for him

There isn’t an argument that Internet Explorer gets the most attention, mostly because IE is automatically included on all Windows OS. Firefox earned its reputation by word of mouth, ease of use and self-proclaimed better security. Internet Explorer, though, still tries to get over the emerging Firefox specter by improving its security features. Is Firefox better than Internet Explorer when it comes to security? These points will help you decide 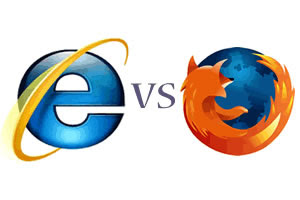 All of us wants to work in user friendly and secure environment and as far as security is concerned we all want it.

We all know that there is no place safe on the internet, including all browsers. As much as Firefox claims they are the safest browser to use, their growing position may eventually change the ballgame. At one time, Internet Explorer was the most vulnerable to malware .Now that Firefox is starting to cut into IE’s dominance by being preinstalled on operating systems, Firefox users will eventually be more vulnerable to malware.

Firefox’s security settings are much simpler than Internet Explorer where you can set JavaScript restrictions from all websites in a few easy steps. The only problem here is that you cannot customize for specific websites. Nevertheless, a NoScript plug-in can be used on every Firefox browser that allows scripts to run on specific websites you already trust and turning off script for websites you don’t trust

Compared to Firefox, Internet Explorer gives you the works in giving security that is more detailed. For a first time or busy user, it might be too much to learn and a user may ditch it for the simpler approach at Firefox. However, IE’s ability to block only sites you want blocked and tweaking degrees of security helps for better time web surfing without security interruptions.

So, is Firefox better than Internet Explorer when it comes to security? IE wins with security, though only slightly and based on the ability to surf without interruption. Firefox is virtually equal in safety. However, it will be with probable security setting interruptions while online for the sake of more consolidated security features

As far as design is concerned almost both are going over one an other, On one hand IE is having the webslice, On other hand Firefox is having Personnas where you can dress up your browser with your own design also.

As we are coming to other things there is not a big difference..

Now you guys will decide that which one is better and let us know by leaving comments.