Hardware and software errors, viruses and malware, simple human mistakes – these are just a few reasons why it is important to care about data loss prevention and protect the associated operational processes. While insuring hardware assets seems to be manageable by most people, the question of insuring the most valuable asset, information and information’s integrity is of the same, if not higher, importance?

It is very flexible and can perfectly meet any individual requirements:

• Handy Backup has a comprehensible task-based architecture with three types of tasks available: backup, restore and synchronization.
• In addition to “common” file and folder backup, there is a number of presets that facilitate backups of critical data, such as My Documents, Microsoft Outlook, Windows registry, etc.
• Such inevitable for up-to-date backup software features as backup scheduling, backup data compression and encryption are fully supported by Handy Backup. 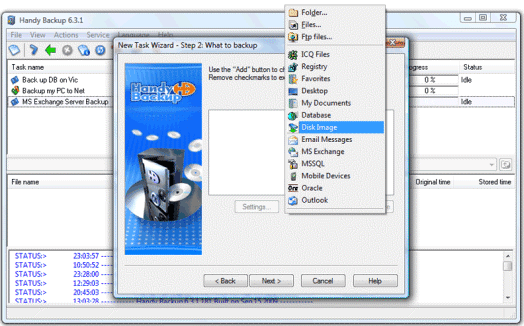 Unlike most other backup software out there, Handy Backup doesn’t treat your data like faceless chunks of memory. It features a complete, extensible plug-in-based system and a variety of plug-ins designed to back up settings, playlists, tweaks and preferences of your favorite applications that you’ve tweaked to perfection. Users of the utility can also create new plug-ins of their own, which is relatively easy and requires only some basic XML knowledge.

IT-experts can take advantage of extended feature set including disk image backup and database backup. Database backup-related functions are what makes Handy Backup so powerful and unique. There are several advanced plug-ins that can handle backup and restore of most popular DBMS including Microsoft SQL Server, Oracle database, IBM DB2 Data Server, Lotus Domino/Notes environment, and a common Database Backup plug-in that can be used for any ODBC-compatible databases. Also, there is a professional plug-in for backing up Microsoft Exchange Server stores.

Handy Backup is one of the most stable, effective and easy-to-use applications for automatic data backup, recovery and synchronization. Enthusiasts translated Handy Backup for more than 20 languages. With this program, Novosoft LLC has partnered with such companies as Microsoft, IBM and Oracle.

We are giving away 5 Licenses for HandyBackup Standard. See Details here