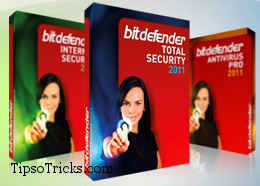 In the list of most popular antivirus of 2010, BitDefender reserves it place at the top. With the best and tightest security of all BitDefender provides most trust able security for your computer.

Beside Quick and Full system scans, AutoLogon scan, deep system scan and custom scan are some of its scanning options. While in Game Mode it frees the the processor from antivirus engines processes and lets handles the processes for running game, keeping BD low on system resources and lets you enjoy your games quietly without any prompts.

See what they have to say about their new 2011 product release:

The setup installers of BitDefender 2011 products are available for download from BitDefender’s Official Website. By default, BD is using a small installer to transfer the files over Internet to our PC. You’ve to install that installer first and then start downloading files one by one.

Problem arises when you want to install BitDefender on multiples systems. since there’s no complete setup file, you’ll need to repeat the procedure of downloading through online installer on all systems. But I’m sharing the “Direct Download” links to all products of new BitDefender 2011 security line.
These direct download links are also useful for people who is encountering problem or error with the online installer.

Report the broken links in the comments. I’ll try to keep updating the links as soon as new version is released. Or if you think the buttons above are still linking to older version, tell me in the comments.